Camtasia: Screencasting on the Mac with Style

Camtasia by TechSmith ($149 regularly/$99 introductory pricing, in the Mac App Store, is a screen recording application for the Mac that has generated a lot of buzz over the years on the Windows platform, and has started to make some noise on the Mac front as well.

Camtasia is laden with features like simultaneous webcam and screen recording, contains a wide selection of effects and filters, and offers online video tutorials to help you through the process of putting together a great screencast. If you’ve ever wanted to put together a screencast, Camtasia is an incredibly simple — and yet powerful — tool to get the job done. But it’s not without its flaws.

The Good: The recording process is easy. When you open it up, a menu shows up that provides you several recording options. You can use your native iSight camera in conjunction with the screen area you’re working with, or just keep the camera off. Audio settings are easily accessible, and you can select the size of your video recording from presets or customize them as you see fit. Then hit the red “REC” button and go. 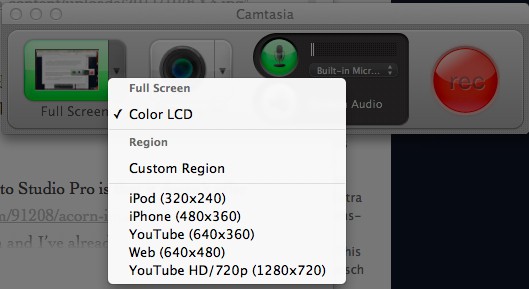 There are a lot of editing options once you’re done recording your screencast. You can import media from your computer, as well as choose from a variety of transitions, filters and actions to apply to your work. One of the more compelling features is called SmartFocus, which keeps track of what you’re doing as you record, allowing for you Camtasia to automatically zoom in and focus on specific parts of your finished screencast. This feature is unique to Camtasia; I’ve not seen anything like this available on another screencasting app. I ran into a couple of hiccups with it a few times, but when it worked (as it did most of the time), it was…”magical”. The export options in Camtasia are vast and easy to wrap your head around as well.

The Bad: Camtasia’s price is a stumbling block for many users, especially considering how frequent many will find the need to screencast enough to validate the cost. At $149 once the introductory pricing lapses, it is more than its main rival ScreenFlow and the price difference doesn’t really add up. SmartFocus isn’t enough to convince me that Camtasia is an app worth that much more than ScreenFlow.

Camtasia is a solid screencasting app. If you’ve yet to pick up ScreenFlow and want to take advantage of the introductory pricing while it lasts, then it is a great choice. But once that price goes up, it makes for a much tougher sell.

Right now you can get Camtasia as part of the The Fall 2011 Mac Super Bundle. It’s only $49 for this app plus 9 other great Mac apps. This deal won’t last long, and with a savings of 86% you should pick it up while you still can!