This Is an Electric Bike That Fits in Your Backpack, Weighs 11lbs

The idea of cycling to work is great. You get some fresh air, and the excuse to eat something more calorific at lunchtime. The grim reality is that you’re going to arrive at the office in lycra, covered in sweat, with nowhere to put your pedaling machine. Well, the Impossible bike, which just launched on Kickstarter, looks to be the solution for that. Not only is it small enough to fit in a backpack, it uses electricity to make your journey a little more relaxing.

The design definitely has a hint of Tron, and in practical terms, it seems really quite ingenious. Rather than using the standard straight crossbar for the frame, the team behind Impossible decided to use circles as the primary structure. As a result, the wheels can fold into the frame, and their casing doubles as a decent saddle. For further portability, the bike is made from carbon fiber, apart from a couple of key points made of steel, and yet it can carry up to 85kg/180 pounds. For the fashion-conscious, most of the exterior parts can be switched out for more vibrant alternatives, as well. 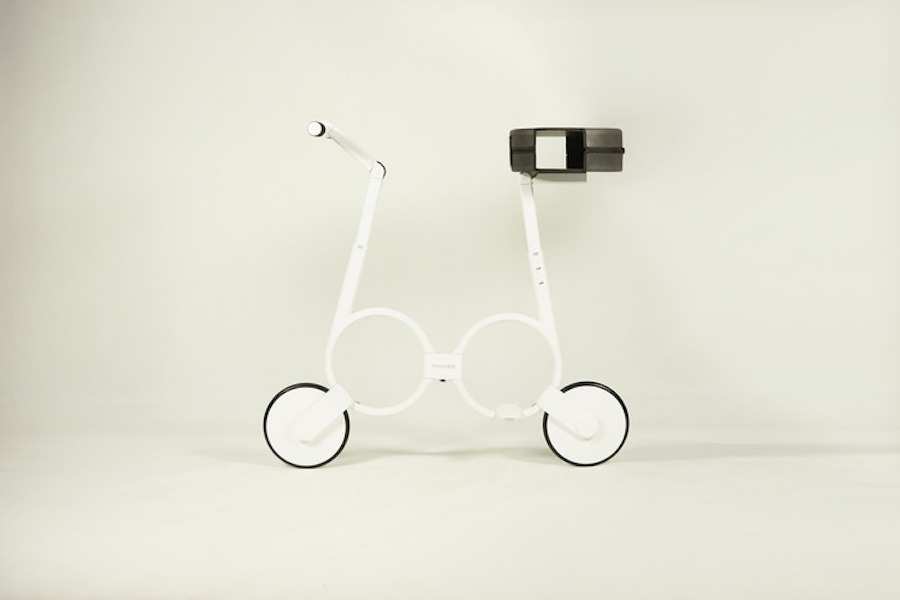 It isn’t bad on the open road, either. I wouldn’t say the ride quality looks “deluxe”, but it seems pretty stable. The bike is powered by ten 2900mAh batteries, which are squeezed into each wheel along with an electric disk motor that can produce a top speed of 12.4 mph. The range at top speed is 45 minutes, but you can squeeze 15.6 miles out of one charge at normal speeds.

No, I can’t envision making long journeys on the Impossible, either. But for zipping off to an alfresco lunch in the park, I’d definitely give it a go. The Kickstarter project still has plenty of time to run, and backers wanting to get their hands on an early unit can secure one for $430 CAD (approx. $380 USD).