Admit it. The retro allure of a Leica is hard not to like. The classic design, the metal frame and the textured leather exterior add up to one fine looking camera. But unless you actually want 1950s technology with 1950s looks, a Leica is going to cost you a bomb. Now, there is a solution — the FrankenCamera Kickstarter-funded kit wants to help you put a Sony NEX-5’s digital organs into a Leica M3’s (c.1954) body.

On paper, it reads like a crazy plan, but it’s just another conversion for the kit’s 18-year-old creator, Oliver Baker. Previously, he showed the internet how he converted a Konica Auto S3 to digital, using the innards of a NEX-5. It was no garage hack, either — Baker designs and 3D prints a new back for the antiquated cameras he converts. In doing so, he is able to incorporate spaces for digital necessities, like the control wheel and the LCD screen, which also then fit perfectly within the converted camera. Baker’s plan now is to start selling the CAD (computer-aided design) templates he uses for his conversions so people can print new camera-backs themselves, and he plans to ship ready-printed conversion kits, as well. Initially, he intends to use the Sony NEX-5’s APS-C sensor, but he eventually wants to go full-frame by using the A7. Funding is still ongoing — £3k is the goal, in order to purchase printing equipment — but given the time left and the amount already raised, it looks likely to be a successful campaign. Folks who back the project now can grab themselves a CAD file for £60 (approx. $98), a nylon-based printed back for £90 ($147) or a brass printed back for £300 ($490).

For more, check out the project on Kickstarter.

The 3-In-1 Mobile Lens Kit: Take Epic Smartphone Photos (US Only) – Pro-quality Fish-Eye, Wide Angle, and Macro lenses for iPhone Or Android + Free Shipping (63% off) Take your smartphone photography to the next level with the StackSocial lens kit – works on both iPhone and Android smartphones. 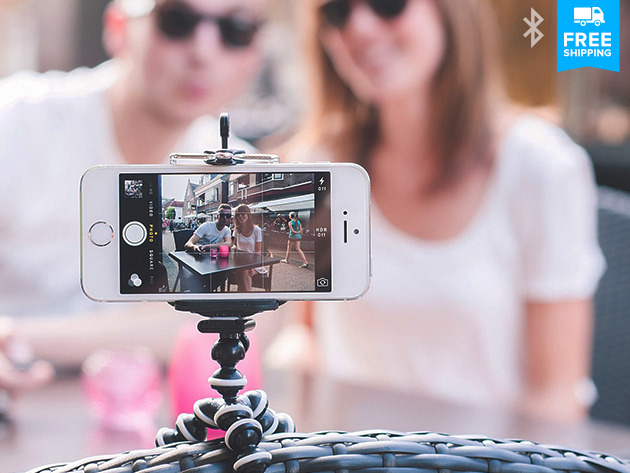 You can’t beat a photographic experience where everyone is in the frame smiling from ear to ear. Now step out from behind the lens and start taking pictures of your favorite occasions.

The Ultimate iOS/Android Photography Kit lets you be the subject and the photographer while being supported by a super versatile tripod and easy to use shutter remote. Step up your creativity and start snapping the perfect pictures.