SoundTrap is an Accomplished Music Studio in Your Web Browser [Review]

The original Garageband app was really quite revolutionary. It was nothing like the software previously used by professional mixers, but it offered an easy way for any Mac owner to make music and was highly praised and utilized by superstars including Radiohead, Rihanna and Trent Reznor (Nine Inch Nails). I remember spending countless hours trying to recreate the sounds of my EDM heroes by manipulating already overused loops into a multitude of arrangements.

Now, a new startup named SoundTrap hopes to spark similar creative enthusiasm with a music studio you can access via any web browser.

The claim of universal compatibility is pretty watertight: SoundTrap works on OS X, Windows, iOS, Android, Linux, and Chrome OS. Users pay a monthly subscription for access to the platform, although a restricted free tier is available. Along with a music studio, the site stores your tracks, and lets you share directly to SoundCloud or via your public profile. 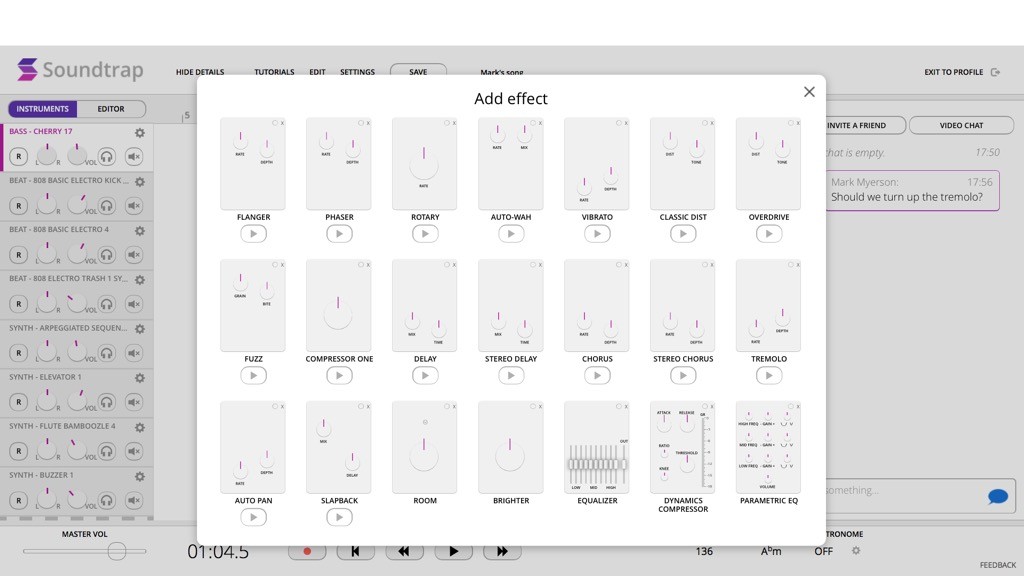 The Studio itself is welcomingly intuitive. You can choose to create new tracks from an in-built software instrument, an imported clip, your device’s microphone, or from a MIDI instrument. Alternatively, you can drop loops into the mix from the slide-out library. The editor lacks a detailed clip adjustment tool, and some of the options are somewhat hidden in context menus, but each track has full volume and balance controls, and each snippet can easily be looped.

The effects and presets are numerous. The wah-wah will appease guitarists, and musicians with electronic tastes will appreciate the ability to tweak multiple oscillators and the amplifier envelope on the in-built synths. It isn’t Korg, but it is decent. SoundTrap’s headline feature is collaboration. Within the Studio, you can ask your musically inclined friends to work on a track. Once they accept the invitation, you can chat or video call them while viewing your composition, and multiple users can work on the project at the same time. It is both genuinely useful, and technologically sound.

This pattern of solidity is a constant through SoundTrap’s platform. Saving large files takes some time, of course, but the ride is otherwise smooth. The platform even integrates with Spinnup to help you publish your work on the likes of iTunes and Spotify, and one free upload is included in your subscription

As expected with a fledgling platform, there is plenty of room for improvement. The UI of the studio has a slightly rough edge to it, and mobile compatibility is severely limited. Although solid, the feature set will not fully satisfy keen amateurs, either — SoundTrap is no Ableton Live.

As a simple way of making or recording music, however, SoundTrap is shaping up nicely.

Keep up with our latest deals and updates on StackSocial’s email newsletter! Subscribe here.