Brace yourself. Dong Nguyen, creator of the wildly popular and insanely addictive (and now deceased) Flappy Bird, has returned with a new game. Swing Copters shares much with Nguyen’s first release, and it has come to take over your life. But don’t worry — there are plenty of other download options in this week’s roundup… 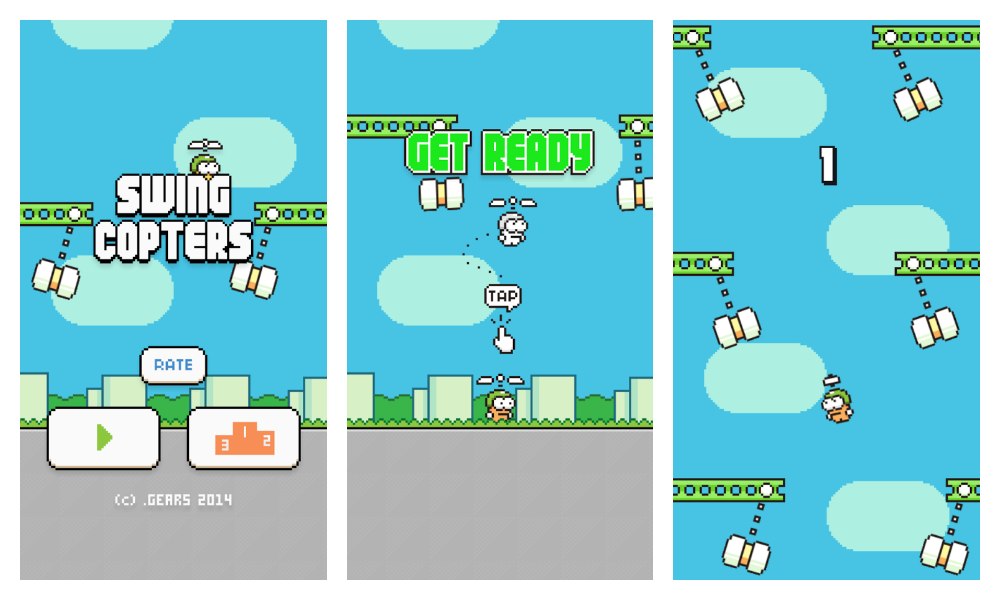 Love it or loathe it, it would be wrong of me not to point out the return of Flappy Bird-style gameplay. Swing Copters gets you to guide a little rotor-propelled dude upwards through the levels of giant swinging hammers, using the familiar tap-tap-tap control method. It’s visually cute but stupidly hard — the formula that has made Nguyen’s work so loved/hated around the world — and the only time you’ll need to pay is to remove the unobtrusive ads.

Being an open kind of OS, Android is home to many, many third party app launchers — some good, some bad. The brand new, slightly experimental Blur seems to fall into the former category, providing an impressive array of home screen functionality. Rather than having to use widgets, Blur allows you to access full-featured apps (in “Pages”) with a sideways swipe. At the moment, only a few apps are supported, but the API is out there, so more will become available given time. It’s a very cool concept, which particularly comes to life when you watch the video! As an avid mobile photographer, I’ve been keenly awaiting the arrival of Afterlight all summer long. Having provided a brilliant, if underrated VSCO-like editing experience on iOS for many years, it has now arrived in the Play Store. Along with a huge number of tasteful filters (and more available for an extra $0.99), you get numerous framing options, and even if you don’t like the cross-processed look, this app is actually really good for general-purpose editing. In a saturated market like file sharing, each provider needs to find a way of standing out. WeTransfer‘s strategy is to bundle 10GB of free file sending with its new Android presence, and in fairness, it’s also a pretty good app. After selecting the files you want to share, you simply enter your chosen recipient’s email address, and WeTransfer sends them a direct download link. Neat and efficient. Google’s stock Play Music app does a reasonable job of spitting out tunes, but it isn’t exactly the world’s most feature-filled music environment. An alternative is Rocket Player, which pretty much has every audio-related setting under the Sun. A brief run-through of the highlights: Chromecast streaming, a 10-band equalizer*, podcast management, video playing, smart playlists, scrobbling, several widgets, crossfading* and variable playback speed* (*requires $3.99 purchase of thePremium Unlocker).

Check out these great Android deals running on StackSocial: